WhatsApp Groups VS WhatsApp Broadcast Lists: Differences and Use Cases 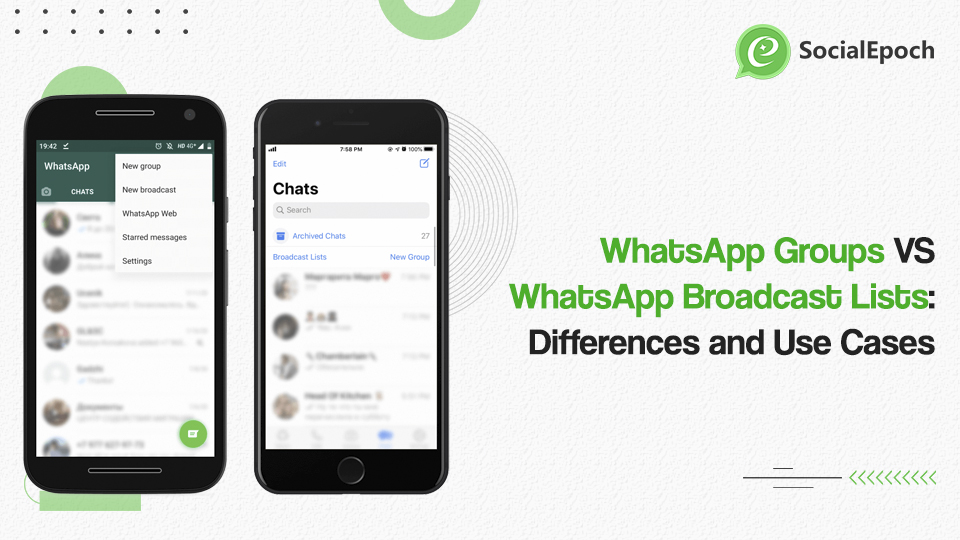 WhatsApp is used as the synonym of instant messaging and can be found on almost every mobile phone. The social networking app which was launched in February 2009 has found itself with more than 2 billion active users across 106 countries over the decade.

WhatsApp is now owned by Facebook and is widely used for personal communication with friends, family, and close acquaintances. Not just that, many businesses are also using the platform as a CRM tool to manage and engage with customers.

But before we head to the difference between WhatsApp groups v/s WhatsApp Broadcast Lists, let’s learn more about both these features.

I am sure most of us are aware of WhatsApp groups and are even a part of a few of them. But for those who don’t know what a WhatsApp group is, it’s a group of WhatsApp contacts who share a common chatbox to engage with each other. It works exactly the same way a one-to-one chat works and has almost all the same features.

1 . To create a WhatsApp group, go to the menu option on the top left corner.

2 . In the first option, you have ‘ new group’ as the first menu option.

3 . When you click on it, you get a list of all your contacts. You can select the contacts you want to add to the group. You can also add or remove a contact from your group anytime you like.

4 . Once you have selected the contact, you can assign a group name and add a display picture.

5 . The person creating the group automatically becomes the ‘Admin’ of the group and has the authority to add, remove, block or make more than one contact an ‘admin’.

6 . Any member sharing anything in the group is visible to everyone else belonging to the same group.

7 . You can also place voice calls and video calls with all the members of the group. Currently, you can have only 4-8 people on your voice or video call at a time.

8 . You can have a maximum of 256 contacts in a single WhatsApp group.

WhatsApp groups are great to have fun conversations with friends or family and have discussions with colleagues. Or even get feedback or opinion from customer groups.

Broadcast Lists are a little different from WhatsApp groups in the sense that contacts and in a broadcast list are discreet and do share any common chat box. The broadcast List feature allows you to send a message or media to several contacts at once. For the recipient, the broadcast message will appear to be an individual message, sent to them personally. There is no limit in the number of broadcast lists you can create. You can select up to 256 contacts in each broadcast list.

The process of creating a broadcast list is the exact same as creating a group.

1 . To create a WhatsApp broadcast list, go to the menu option on the top left corner.

2 . In the second option, you have ‘ new broadcast’ as the first menu option.

4 . Once you have selected the contact, you can assign a broadcast name but unlike a group, you cannot add a display picture.

5 . Similar to a group, you can add or remove any contact an ‘admin’.

6 . Anything you share, be it a text or multimedia file is shared with everyone on the broadcast list individually. It’s a one-way communication where only you can share messages or multimedia. If any member shares anything in response, you will receive it as a personal message in your own chatbox.

7 . Unlike WhatsApp groups, you cannot place voice calls and video calls with all the members of the group.

8 . You can have a maximum of 256 contacts in a single WhatsApp broadcast list.

WhatsApp broadcast lists are pretty useful if you wish to make announcements, share updates and notifications or use them for sharing useful information with your customers.

When to use WhatsApp Groups?

WhatsApp groups are great for when you want to have 2-way communication with people. Brainstorm, share news and ideas, plan a trip with your friends. Everyone will be able to write and read messages from other group members.

When to use WhatsApp Broadcast?

WhatsApp broadcast will save you precious time when you want to send the same message to many contacts all at once. The effect is the same as if you went to each chat individually and sent the message, just a lot faster. Broadcasts are especially useful for updates and announcements.

So that was all about WhatsApp groups VS WhatsApp Broadcast Lists. Tell us how you use them.

Learn more about it here or drop a mail at salessupport@socialepoch.com to talk to our sales support team.